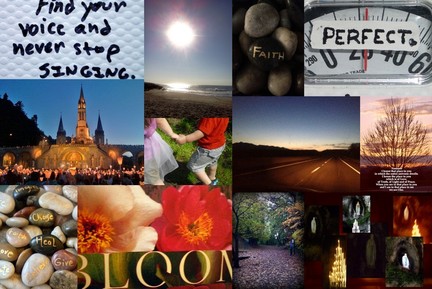 ​Have you ever stopped to ask yourself, ‘What is My Calling?’ How often have we really thought about what we are called to do in this one life we have been blessed with, rather than what we are doing day to day in order to pay the bills? What brings us passion at the beginning of each day? If we had nothing else in this life, what could we not live without doing?

I was introduced to this idea in my early 20’s when I discerned a call to religious life to become a Catholic nun. I had always known I was called to be a ‘helper’ as I worked with Youth in Crisis as well as Youth Prison Ministry. At the same time I was walking with mentors and spiritual advisors who challenged me to take the Called & Gifted workshop from the Catherine of Sienna Institute, which in turn broadened my spiritual life and calling more than I could have dreamed at the time! It brought clarity to the process I hadn’t been able to do prior. I was most definitely called to Intercessory Prayer, Minimalism, and Young Adult Ministry as I could see my life as a nun. But was there more?

My journey was not smooth sailing by any means along this path. The entire time of this sincere discernment I was battling Anorexia, which would turn out to be a 14 year battle of survival and an in depth introspection to what I was truly searching for. More questioning inevitably followed.  As I healed, I would be deeply called to activism around this illness sharing my story, starting Find Your Voice Project, and publishing a book soon to be released on the lessons learned.  During this healing journey I was then called to a Lourdes Pilgrimage Ministry when challenged by a close friend who was dying of cancer at the time, to go work as a Hospitalier in the baths of Lourdes. This idea terrified at me, but in honoring it I found my second home and attempt to minister yearly if not daily from a far.

Was this enough? Was that it? Along the way when religious life was taken from me due to unforeseen circumstances, I found marriage and motherhood to take a surprisingly close second. A calling that stands on its own that I treasure daily, but in truth still believe in a calling bigger than me to follow.

Today, I have combined all these callings and dreams into my Anam Nostos Ministry which ultimately I believe could blend all these gifts into one blessed calling to carry out the rest of my days. I admit it is all very hard work daily, I often feel defeated as if I could not make it happen. But, true to soul I am a believer in dreams. I believe you can make anything come true if you want it bad enough, there is always a way. You just have to find the right angle.

So, I challenge you here to ask the hard questions for your own journey. Take the time alone, on retreat, a walk to really stop and reflect on your calling. Go beyond your fear! Are you living your true passion? Life is too short to just walk aimlessly and sluggishly through, not honoring the gift of life you have received.