I was an old soul at nineteen years of age, when I unknowingly walked into a world that I would discover was not so easy to escape alone.
​
That journey started out with a simple diet, or so I thought. Only within three short months did it turn into a battle I was not always up to fighting. Four inpatient treatment programs, countless hospital visits, doctors, therapists, groups and 12 step programs were not enough to wake me up.

Then one final desperate day, when all of life was dark within and around me, I met myself face to face. My mentor and best friend called 911 in a last ditch attempt to save my life. Before I was placed on a 5150 psychiatric hold, I was tackled down to the ground with force by a police officer and cuffed like a criminal for simply starving myself and wanting to die.

That moment I will never forget, for I discovered in my pain and in my healing, I could make choices that went against my body hatred and my anorexia. I realized that I was actually the one in charge of my life, not the eating disorder.

Today, I can honestly tell you, I am in recovery since 2003. I used to say, ‘I am recovered.’ But, then I realized that was impossible to say, for life is a journey. We learn, grow, heal and walk each day of life with new eyes and new breath. I have not gone back, but I make a conscious effort each day to choose life.

It (anorexia) is a self-hatred body war so destructive in mind, body, soul and spirit that I would not wish on my worst enemy.

It is true; today I wake up every single morning and embrace life, remembering I conquered the beast.

Today, I make a conscious CHOICE to nurture and heal my body every day physically, emotionally and spiritually. It is a constant life-giving journey, not a destination you land upon.

Today, I make a choice to offer my body what it needs knowing I am respecting the body given to me by a power greater than myself.

And choose life is exactly what I do. I embrace a future daily. I embrace JOY!

It will always be a journey. Think about as you find your body peace. I will walk with you, but not in front of you.

It began so unexpectedly and simply, a recent high school graduate at the time. I was unhappy with myself and my life. It was that clear. I did not take the college route at first, which my friends had chose. I had no direction, no goals and the worst of all, no sense of self or worth at that time in my life. Having the most prominent influence in my life at the time being the media, I searched for answers there. I decided too easily, that if I lost weight and changed my appearance, I would be able to make new friends and perhaps have a life. My goal was to escape the loneliness and depression I had been living through each day endlessly. After all, when I turned on the television, went to the movies or read countless magazines with self-help fix it articles, all I ever saw were these beautiful perfect women who 'had it all' or so it had seemed. I thought this was the answer.

It began as a simple diet, eating better, exercising and buying a scale. The scale was my EVIL, for it destroyed and ruled my life from that very day.

THREE fast months into the diet journey, with constant compliments from others about my new look 'fed' me the addiction, I fell victim to Anorexia. It was no longer a choice, but a full-blown illness.
​
There is a point, where there is no turning back. A point where the mentality, 'I can do it alone,' simply does not exist. It becomes more than psychological, it becomes chemical and starvation at any weight. It was no longer about what the media said about me or anyone else would tell me. Now, it went deeper than I could comprehend. And it only took... three months!

I went from dieting to extreme dieting. I went from a little exercise to obsessive exercise in the middle of the night in pouring down thunder storms. Nothing stopped the desperate and sick need to rid my body. I owned multiple scales having lost all sense of trust and I would not stop until I reached the 'magic number' that does not exist. It was never low enough. It could never be low enough, for it was never really about the number.

No reflection in the mirror, store windows, car doors had been perfect enough or could ever be, for it was an image I created in my head that was not realistic. I started wanting popularity, and soon found only isolation and a deep and darker depression than before. Ritual, blacked out parts of my life, as emergency room nurses and doctors, hospitals and scales were my only friends.

I hit a hard-fast wall shortly after hitting my lowest weight. My worst nightmare struck. I woke up one morning... hungry. Hunger was a sense I managed to push away. Panic stricken, I went back to the media to find another solution. They 'helped' me once, they had to help me now. And without fail in a faulty news world, a television news segment done poorly on Bulimia making it look even more attractive to a needy eye, such as my own, sadly gave me a new false 'hope'. All that I saw was how 'I could have my cake and eat it too,' introducing me to a new and bitter hell.

On that day having been starving for countless weeks, I binged until I could put no more food into my weak and worn frame. It was the FIRST time I tried Bulimia. In sheer terror of calories being digested and fat growing on my body, I tore my esophagus after a violent attempt at purging. It didn't stop me to continue the process that night.

I was desperate. I was out of control. I could see no one or nothing around me. I began a new pattern; weeks of starving through days of binging and purging. At my worst moments, unspeakable amounts a day I put my body through this horrid ritual destroying my physical being in ways determined later.

I actually stopped one day to say ‘thank you’ to the television thinking this was helping me. Can you imagine such loathing and lack of understanding for one’s own self that I could do such a thing?

What did I gain from that ‘simple’ diet? It was more like what did I lose. In the years that passed, I lost countless apartments and roommates, my once in a lifetime dream education I had fought for, thousands upon thousands of dollars, countless friendships, went from one job to the next trashing the trust of anyone in my life, brutally damaging and scarring my health, being told I took away any chance to have a child of my own, surviving a heart attack alone and lost years. FOURTEEN years to be exact.

There is so much more to this story that cannot be written here and parts that can never be told. They were the years barely lived and the endless days were blacked out.

I am here today because 'someone' helped me Find My Voice. It only took fourteen years, the depths of hell and destruction of my health and life.

This is not easy for me. I had hoped to put it all behind me. But if there is one thing I believe with all my heart, it is that there is always a positive in EVERY negative. I believe we should all be held accountable for giving back to the universe.

Today I believe in my recovery journey. I believe in acceptance at every size. I believe in love of every person with the unique and beautiful spirit that resides in EACH of us without a doubt!

My life is said to be a miracle.

Today, I want to share my gratitude with those who are walking the road I had, for their lives are just as much a miracle and just as precious as mine.

As someone held my hand, I want to hold others.

Together we CAN make a difference 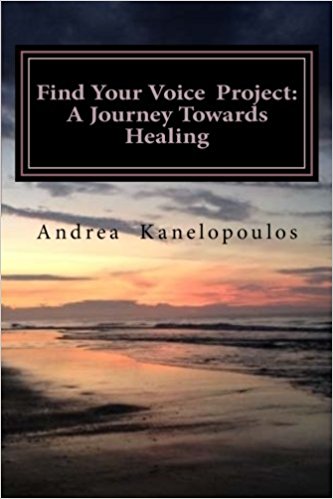